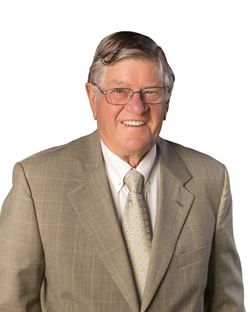 John was raised in California and earned his bachelor’s degree from UC Berkeley. While at Berkeley he played intercollegiate baseball and was elected by the student body as one of the three representatives at large on the student body council. After graduation, he worked for U.S. Steel Corporation for approximately 10 years, before entering the real estate industry in the San Francisco bay area with the Grubb & Ellis Company. Subsequently moving to Los Angeles as The Sales Manager for Grubb & Ellis with over 100 agents.

John moved to the Monterey Peninsula in 1975 and founded the firm which is now known as Mahoney & Associates. In his career John has handled commercial real estate transactions with an aggregate value of over $1.7 billion dollars. In addition, John has been very active in the local community and among others he served President of the Monterey Rotary Club, received Citizen of the Year from the Chamber of Commerce and currently serves as the Board Chair for the local hospital.

Get the latest news on current and featured Listings